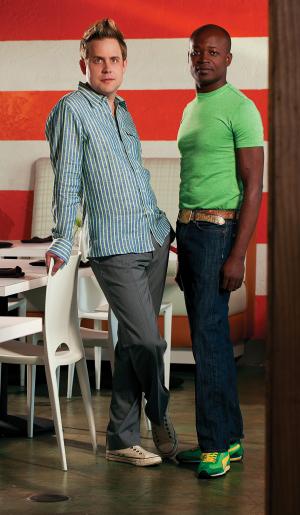 Finding a new local restaurant is like finding new friends in Vegas: It’s not always easy, but when you do finally come across someone interesting, you hope they will integrate well into your already-established friends, interests and lifestyle. And you hope that they will stick around awhile.

That’s the thing about this desert city. Great things and people come, but whether it’s to move on to something bigger and better or the result of hitting rock-bottom, only a few of them stay. Sometimes, however, the really special ones not only stay, they grow and continue to help transform Las Vegas for everyone’s benefit. DW Bistro looks to be one of those local gems.

The fusion cuisine bistro, which opened its doors less than a year ago, has become such a local hot spot that owners Bryce Krausman and Dalton Wilson (whose initials inspired the name) recently expanded the space, adding 1,300 square feet to its footprint. The storefront abutting DW Bistro’s home at 6115 S. Fort Apache Road now accommodates overflow,the Sunday brunch crowd, private parties, cooking classes and (soon) demonstrations and, most importantly, a pastry and dessert bar.

Like so many off-Strip restaurants, DW Bistro is in a strip mall, but nothing about its modern and fresh decor, outdoor patio and unique menu says hole-in-the-wall diner. Instead, it’s an accessible, inviting bistro. “We are fine dining with no pretenses,” Wilson said, “and our clientele appreciates that they can come in to grab a bowl after an afternoon workout or come back for dinner as casually or done-up as they please.” These days, it’s more common to hear about local losses such as the recent closure of Nora’s Wine Bar and Rosemary’s than expansion spurred by success. But Wilson and Krausman believe they have a secret sauce both in the kitchen and on the floor: “Our menu is simple,” Krausman says. “Yet nothing is simple about the dishes.”

Although Wilson and Krausman have married American, Jamaican and New Mexican fares on the menu, each stands out individually. And while Wilson is executive chef and the mastermind behind the recipes and vision for new dishes, it is sous chef Rob Proby who executes and brings those concepts to delicious reality.

Outside the kitchen, though, the Krausman and Wilson chalk up their success to three things: presence, a hands-on approach, and the joint venture between themselves and their “clients.” Essentially these three things amount to one bigger idea: customer service.

“It’s a joint venture not only between Wilson and me, but between us and our clients,” Krausman says. “People are part of our model.” Including customers in the business model requires having owners who are always present and willing to get their hands dirty.

Whether they are walking the floor, meeting new customers, conversing with regulars, the boys never hesitate to fill up water glasses, rearrange tables for larger parties or do what it takes to ensure that patrons have the best experience possible. “We are present and we are hands-on,” Krausman says. “We want to succeed, so we have to make that happen.”

With the intention of building the DW brand, Wilson and Krausman are hopeful that the new space will allow them to continue making a mark on the Las Vegas restaurant scene. And while at the moment they are plenty busy with DW Bistro, they admit they would love to be working on additional projects, such as opening another restaurant downtown in the middle of the brimming Las Vegas arts community. Until then, they will continue to bring their colorful fusion cuisine to southwest Las Vegas.