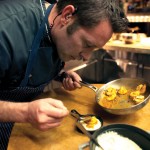 There’s nothing worse than being behind the guy or gal in line at a buffet who scoops up the entire top layer of cheese with their spoonful of lasagna. How about finally spotting the beef and broccoli, only to find a heap of broccoli without a trace of beef, or walking up to the sushi bar for sad and soggy California rolls? All problems of the past.

At the new Bacchanal Buffet in Caesars Palace, 75 of the more than 500 menu items are presented as individually portioned items in charming little bowls, cast-iron skillets and custom-made china. And unlike the messy, traditional chafing dishes and hotel pans of the past, these fresh dishes haven’t been suffering under a heat lamp, because as soon as a few guests pick them up, another new batch is put out.

The trend landed in December 2010 with Cosmopolitan’s Wicked Spoon, but didn’t stop with the Cosmo.

“The miniature dishes are some of our most popular items,” says Bacchanal executive chef, Scott Green. “People eat with their eyes first, … and these minis add a different element to the traditional buffet. It’s not the trough style of feeding people anymore; it’s this little portion, just for them.”

Want to give it a try? We snagged Bacchanal’s recipe for its roasted South Carolina shrimp and grits, served in individual cast-iron skillets (try urLaTable.com) for that Southern, home-cooked look, a little touch that goes a long way.

Bring half and half, salt and white pepper to a simmer in a large saucepan. Add the grits and whisk for 10 minutes so the grits do not stick to the bottom of the pot. Then whisk in the grated cheddar and Parmesan cheeses. Adjust the seasoning to taste and remove from the stovetop, but keep warm. Spoon the grits into your serving vessels followed by two shrimp and a spoonful of chorizo and shrimp sauce (see recipe below). Garnish with chopped chives.