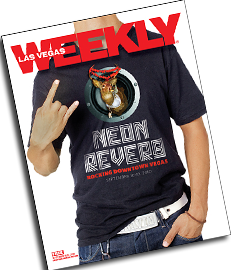 “People usually make comments, but the bag is immediately educational when I tell them the condoms are useless for safety purposes due to their exposure to sunlight and heat,” she explains.

How appropriate that Morgan, youngest sexologist in the United States, resides in Las Vegas. At just 15 years old, one year after moving to Vegas, Morgan decided she wanted to be a sex therapist. She started researching the industry, looking up every sexologist she heard of in sex documentaries and episodes of HBO’s Real Sex. One name kept popping up: the Institute for Advanced Human Sexuality.

Fast forward eight years: Morgan now has a Bachelor of Science in Human Services Counseling from UNLV and recently got her doctorate from the Institute for Advanced Human Sexuality.

“As the youngest sexologist in the country, there’s a fear that I won’t be taken seriously, but being a sexologist is my biggest dream ever,” Morgan says. “And I did it!”

Now she hopes to tackle some of the big issues in her field, like sex education, toxins in sex toys and “sexy safe sex.” In May 2011 she will graduate, again from UNLV, with a Master of Public Health and a focus on Environmental and Occupational Health.

“I really didn’t think I’d still be in Vegas, but now I don’t know when I’m going to leave,” Morgan says. “There’s just so much work to do here.”